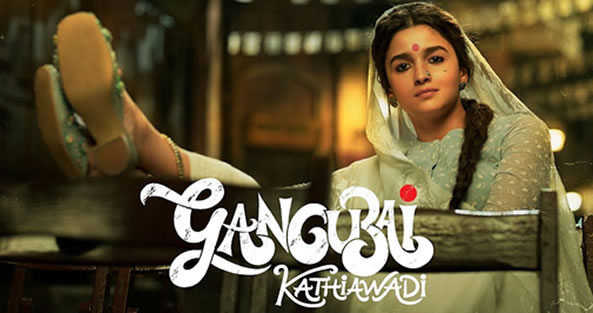 MOVIE RATING
Based on S. Hussain Zaidi and Jane Borges’ hard-hitting book ‘Mafia Queens of Mumbai’, Sanjay Leela Bhansali's Gangubai Kathiawadi creates a world of its own that's corrupt, violent, reckless but still overflowing with emotions. Viewing the lanes of Kamathipura, one of the oldest red-light districts of Mumbai, Bhansali makes sure that he captures them in the most captivating way.  Young girls, who've landed here unenthusiastically, decorate the streets, having accepted their fate with nowhere to go. It archives Ganga’s rise to power and fame from a shy small-town girl in Gujarat, to the undisputed queen of kamathipura in Mumbai. The beauty of the ‘Gangubai Kathiawadi’ lies in how it shows Gangu’s character transform through numerous stages in her life.
About the film’s plot, it’s sometime in the early 1950s or 1960s when a starry-eyed and naïve Ganga is conned by her own lover Ramnik (Varun Kapoor) to elope with a promise that he will pave the path for her to make it as a heroine in Bollywood. What turns out and the truth as we all know is that that Ganga (who rechristens herself as Gangu, and eventually Gangubai), ends up being the heroine of Kamathipura instead. Over the years, Kamathipura becomes her home, the brothel girls her family and all of Kamathipura her domain. But her journey is fraught with challenges, opponents and a social stigma that brings out the fighter within her.
The movie has two stories. While the first half tells Gangubai's story from being a barrister's daughter Ganga who was forced into sex trade and how she becomes Gangu with her shares of bruises and scars, the second half shows her rise as a 'gharwali' (Madame of a brothel) and eventually fighting the elections to be the president of Kamathipura.
About the performances, Alia Bhatt slips into the role of the boss lady in a world-full of brothels and lustful men with ease. She is remarkable in dialogue delivery with supreme confidence, audacity and a killer instinct. While Ajay Devgn in a cameo as Raheem Lala who turns messiah for Gangu and packs a punch in a couple of scenes he appears on screen. Shantanu Maheshwari is noticeable in his character Afsaan with his brief romance with Gangu. Jim Sarbh also delivers a worthy performance as a journalist who, in a way, acts as a catalyst in letting Gangu discover her strength and what she's capable of. The rest of the supporting cast like Seema Pahwa and Vijay Raaz has given their best.
Bhansali drives his narrative much like the book with each challenge and episode moving like a chapter. There are some beautifully crafted, tear-jerking moments in Bhansali’s signature style - with a lot of finesse and flair. The production value is top-notch. Each song is masterfully and colourfully picturized. Meri Jaan and Jab Saiyaan are soft romantic tracks while Dholida and Jhume Re Gori let you groove to some peppy folk beats.
Gangubai Kathiawadi ends with the transformation of a damsel in distress to a warrior. But then, there's no denying the fact that such stories do exist and deserve to be told.
Overall, film Gangubai Kathiawadi is worthy to watch once for good performances of star cast and its entertainment quotient.