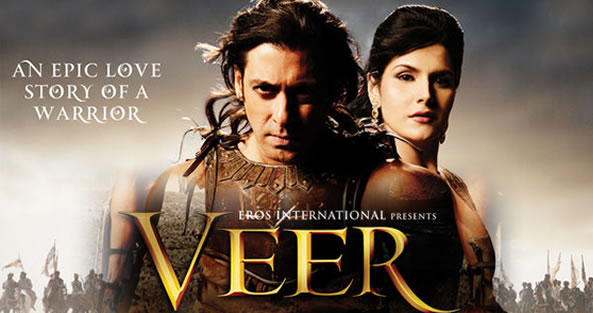 Veer Pratap Singh (Salman Khan) is a Pindari prince and the son of the great Pindari warrior, Prithvi Singh (Mithun Chakraborty), who was known for his great battles to free India from British rule. Veer wishes to continue his father's legacy by leading a movement of Pindaris against the British in order to free both the Rajasthani Kingdom of Madhavghar and the rest of India from the great colonial power. Veer receives the help of his younger brother, Punya Singh (Sohail Khan) in gathering an army. However Veer finds opposition from the King of Madhavghar, Gyanendra Singh (Jackie Shroff), who sees Veer as a threat to Madhavghar and his rule and orders for Veer to be killed. Veer and Punya along with their supporters go into hiding within the Thar Desert of Rajasthan, while Singh makes an alliance with the British Governor of Rajasthan, James Fraser (Tim James Lawrence), saying that Madhavghar will support the British in crushing the Pindari movement and eliminating Veer.
To keep stakes high, the Pindaris kidnap Singh's daughter Princess Yashodhara (Zareen Khan), who Veer finds himself in love with. The Pindaris then make a failed attempt to take down Singh's palace by surprise. However Singh's spies discover the plan and thousands of Pindari warriors are slaughtered. Veer fails to get his revenge on the corrupt King but knows that Punya has been captured by Yashodhara's brother Gajendra (Puru Raajkumar) as Veer runs in to save his brother and kills Gajendra's men but Gajendra is killed to when he gets punched by Veer and lands on a sword which Gyanendra seeks revenge for his son. In the meantime, Lady Angela Fraser (Lisa Lazarus), wife of James Fraser, begins to question her husband's actions as he supports the evil king in slaughtering members of the Pindari movement. Fraser refuses to back down from his campaign of crushing the movement.
After Veer promises his father that he will finish Singh, he gatecrashes Yashodhara's Swayamvara. As he takes the princess away from the fort, Gyanendra Singh sees a vast army of Pindaris has surrounded his fort. He asks the British to help him but they refuse and make the Pindaris their ally in a bid to escape from Madhavghar. Before the British leave a battle follows in which the Governor and Gyanendra Singh are killed. Veer, wounded from a gunshot, falls unconscious in the arms of his father. Years later it is shown that Veer's son and Prithvi are having a friendly fight.

An alcoholic professor is sent to a juvenile school, where he clashes with a gangster,.. more...
Home / Movies /Veer