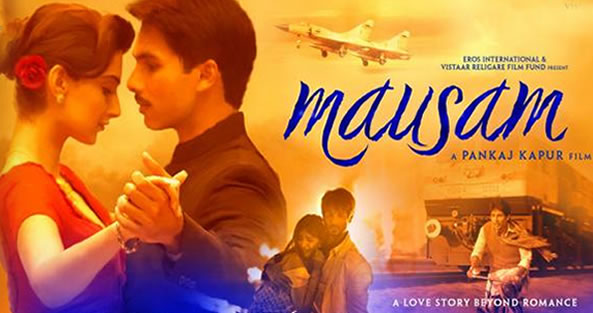 The main story of the film spans over a period 10 years, from 1992 to 2002 and includes references to Demolition of Babri Masjid, Bombay Riots, 1993 Bombay bombings, Kargil War, 9/11 attacks and Post-Godhra Riots.
Mausam is the story of two lovers, Harinder Singh, known as Harry (Shahid Kapoor) and Aayat (Sonam Kapoor). Harry is a happy-go-lucky Punjabi guy, whereas Aayat is a Kashmiri girl. In 1992, the two meet and fall in love at Mallukot, Punjab, where Harry's family is from. But before they get to spend some time together, Aayat leaves for Mumbai with her uncle and aunt; and Harry joins the Indian Air Force. In 1999, Harry, now a Squadron Leader meets Aayat in Scotland, where they get closer once again. However, before their marriage, the Kargil occupation happens in Kashmir, and Harry is called back to India to fight in the war, fate separating them once more. After this separation, they begin to long for each other. Harry paralyses his left arm during a special mission in the Tiger Hill. They both want to speak to each other but fate always brings them closer and then separates them again. At the end, in Ahmedabad during post-Godhra riots, they finally find each other and decide to settle down with an orphan child rescued by Harry from the riot which also results in his arm cured, with a child of their own on the way.

Film is set in the backdrop of Money, Power & Business. largely based on the Stock market. more...
Home / Movies /Mausam