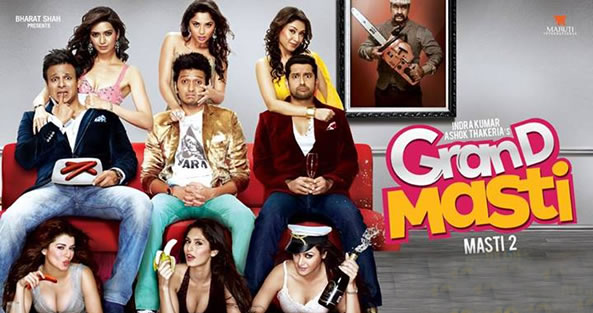 Three friends – Meet (Vivek Oberoi), Prem (Aftab Shivdasani) and Amar (Ritesh Deshmukh) – are married and don't like their wives. Meet thinks his wife Unatti (Karishma Tanna) is having an affair with her boss, Prem doesn't like it when his wife Tulsi (Manjari Fadnis) doesn't spend quality time with him and Amar hates his marital life because his wife Mamta (Sonalee Kulkarni) is more concerned about their son, Pappu.
One day, the men receive an invite from their college, SLUTS (Sri Lalchand University of Technology and Science), to attend their college reunion. Their wives don't come with them, so the three decide to have Grand Masti there to escape their boredom.
When they arrive, they see the women fully clothed and the men too afraid to express their love for them. This all due to the fear of Principal Robert (Pradeep Rawat), who hangs people naked on a tree if they disagree with his rules. They find out that their former student, Hardik (Suresh Menon), is in a mental asylum because of the principal. Meanwhile, Prem meets one of his former teachers, Rose (Maryam Zakaria), and is attracted to her. Meet meets Marlow (Kainaat Arora) and is attracted to her. Amar meets Mary (Bruna Abdullah) and is attracted to her. The men then goes to the women's place to have sex with them. But just when they were about to do it, they find out that Rose, Mary and Marlow are relatives of the principal. The principal chases them down thinking they had sex, but they get away as their wives come to spend time with them.
The trio then get an MMS showing them the footage of them having sex. Luckily, the video doesn't meet the eyes of their wives. They find out that it was Hardik who sent them the video, and he blackmails them. Their task is to kill the principal to fulfill Hardik's revenge. They fail in killing him, so they decide to try to delete the videos off Hardik's phone. They succeed and continue to spend time at the reunion.
It's the last day, and the vengeful principal has put pills inside the soup which attract people to the ones they love. The trio end up being with the girls, and the principal catches them red handed. The girls then reveal that the principal is impotent. The three get chased by the principal along with the attracted girls. When the trio end up on the roof of a building, Hardik pushes the principal and the principal slides down the roof and hangs on to a bar. The trio try to save him but Hardik pushes them, too, and they hang on to the principal. The girls come and push Hardik off the roof and he hangs on to Meet. The three tell principal the truth about not having sex with Marlow, Mary and Rose. The girls try to make a rope out of their clothes, but the boys fall and end up in the hospital.
Their wives angrily ask them what exactly happened that night. Principal Roberts calmly replies that due to a misunderstood affair, their husbands suffered this consequence. Shortly later, a doctor comes and informs the principal that he is no more impotent since the blood now properly flows all over his body due to the pressure generated while hanging on the bar. Hardik marries Marlow. The film ends up Roberts, Hardik and the trio about to have sex with their respective wives with everything now going well.

Film is set in the backdrop of Money, Power & Business. largely based on the Stock market. more...
Home / Movies /Grand Masti