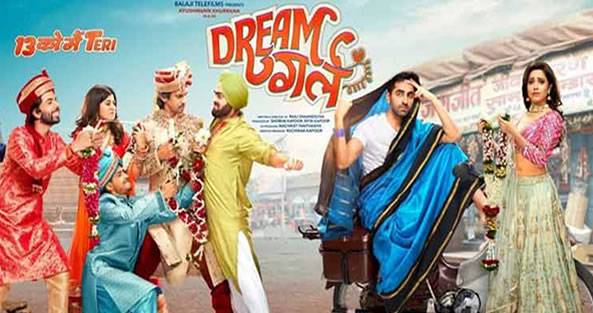 MOVIE RATING
After winning a National Award recently, Ayushmann Khurrana has done good job in his latest release Dream Girl. It shows the leading man in a different light, and manages to tickle in parts.
Ayushmann Khurrana starrer film Dream Girl revolves around Karam, who plays the role of Sita Maiyya in his town’s Ram Leela each year, as he can stunningly impersonate a female’s voice. Desperate to find employment, Karam picks up a job as ‘Pooja’ at a call center for sex chats, keeping most people in his life in the dark about the nature of his work. How long can he keep it up before everyone including his girlfriend and father find out? Karam aka Pooja makes numerous men go weak in their knees with his melodic voice but, soon this boon becomes a bane for Karam. What happens with Karam and how he deals with his problems forms the rest of the plot.
Ayushmann Khurrana is remarkable in the role of Karam aka Dream Girl Pooja. His comic timing, his expressions, his voice modulation, all is flawless and he wins hearts again with his act. Annu Kapoor’s act is also commendable. Nushrat Bharucha as Khurrana’s lover doesn’t have much to do in the film but effective in her act. Vijay Raaz is comical as the shayar cop and balbrahmachari Abhishek Banerjee is also good in his role. Manjot singh is good as Karam’s best friend and their camaraderie seems entertaining. Raj Bhansali is OK in his role.
About the film, the concept is very refreshing and this movie is a good in the sense of humour. It is a complete laugh riot. The comic timing of every actor is really noticeable. Director Raaj Shaandilya manages to evoke some amount of laughter in this situational comedy. But there is also a dollop of humor which treads into the bizarre, double entendre and at times offensive zone. Jokes are new and the dialogues are funny.
The songs, ‘Radhe Radhe’ and ‘Dil Ka Telephone’ add some of the pep to the wobbly plot and the background score are good, screenplay is enjoyable but, there was scope for improvement in the story.
Overall, film Dream Girl is worthy to watch once for its rib-tickling quotients and a few lovely performances.