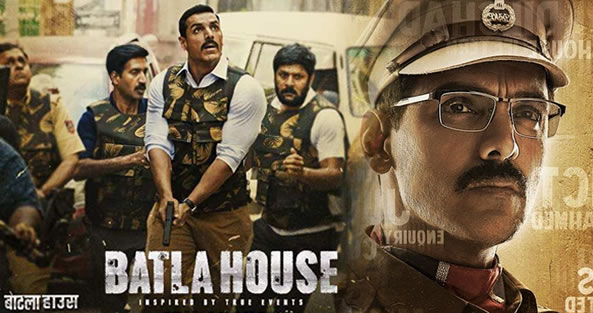 MOVIE RATING
Film Batla House is a fictionalised version of the Operation Batla House, which took place in 2008 against Indian Mujahideen terrorists in the Batla House locality of Jamia Nagar, New Delhi.  The movie traces the story, struggle and mental agony of a seven-member Delhi Police Special Cell team post the encounter of Indian Mujahideen terrorists allegedly involved in the serial blasts that stunned Delhi on September 13, 2008.
In 2008, the Batla House encounter in Delhi became controversial with the public and media questioning the police’s intents and objectivity. The opening credits of Batla House reveal us that Sanjeev Kumar Yadav and his wife were the “inspiration” for this film. This film is spinning around the perspective of DCP Sanjeev Kumar Yadav as he struggles to fight the politics, trial by media and a marriage on the verge of divorce.
The action thriller opens rather gawkily, with a woman in a tirade. We realise she is ranting at her hubby. The camera finally tracks into a calm John Abraham listening to Mrunal Thakur. A starched police uniform and gun are neatly arranged on the bed, so we know Sanjay (Abraham) is a cop and his wife Nandita (Thakur) is fed up. He challenges her to leave him.
An ACP assigned to a Special Cell of the Delhi police, Sanjay is a dedicated officer who follows instructions obediently. But things go awry when an investigation turns into an unauthorised encounter and a defiant reporting officer K.K. (Ravi Kishan) is seriously wounded on Sanjay’s watch. Wrecked by guilt, suffering from post-traumatic stress disorder (PTSD), Sanjay’s life begins to unravel.
Together with his team, Sanjay spends the next two years trying to prove that the boys shot dead in Batla House were not students, but members of a terrorist cell. A speech encapsulates populist opinion about brainwashing of youth and the misinterpreted holy book. Some real news footage is interspersed to convey timelines and outrage against the Delhi police.
The latter half of the movie picks up pace, mainly when Sanjay and team find their investigative mojo and when the public prosecutor and defence lawyers present two contradictory perspectives on the same incident.
About the performances, John Abraham has done a good job emoting a conflux of disappointment and anger of hapless officer who faces the trial both within and outside the court for his fight against terrorism. Mrunal Thakur has essayed her small but essential role of Nandita (DCP Sanjeev Kumar’s wife) with conviction. Rajesh Sharma does justice with his limited part. Manish Chaudhari as Police Commissioner Jaivir is remarkable. Ravi Kishan, who plays the role of KK, has a very small role but has played his part with conviction.
The dialogues are effective as per plot. Art Director has done a decent job to give the audience a visual connect with the characters and locations. Thumping background music accentuates drama, emotional angst and suspense.
The first half of the movie is crisp, engaging and packed with some raw action. It is encouraging to see action heroes such as John avoiding filmy and choreographed action scenes. It works with the viewers when you are recounting the real-life incidents. The second-half is saturated with emotions, saved by the director before becoming over-dramatic.

Overall, film Batla House is worthy to watch once due to its patriotism quotients and a few good performances.