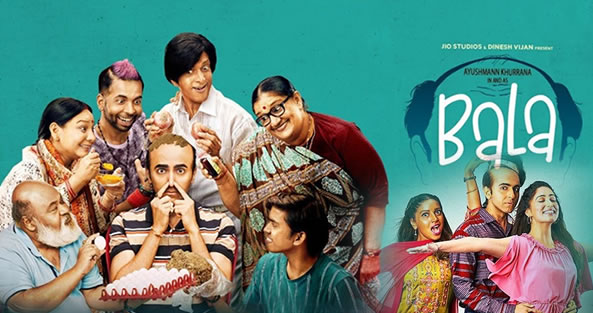 MOVIE RATING
Film 'Bala' has a satirical take on the Indian Culture treating Premature Balding and Bodyshaming as a taboo. It is an another entertaining film by director Amar Kaushik after thriller Stree.
About the story, Ayushmann Khurrana plays Balmukund Shukla, a 25-year-old young man who works as a full time Marketing & Sales Executive for a fairness cream company in Kanpur. Balmukund also follows the passion of a stand up artist. As a victim of Premature Balding, he is always in denial about his weakness. To experience the journey of Bala being ridiculed at his Premature Balding from the society and how he embraces his weakness, you need to view the movie. Balmukund Shukla aka Bala (Ayushmann Khurrana) tries all sorts of hacks to grow back his silky smooth hair, but to no avail. Finally, he finds a fix, but will that bring him permanent happiness?
About the movie's plot and screenplay, in the first half the movie moves on a quite slow pace in establishing Ayushmann's character. The situational comedy brings ample opportunities for the first half to be high on fun with witty one-liners that will leave you in splits. There has been overemphasis on Ayushmann's struggles to get rid of his balding through countless remedies. The second half of the movie starts picking pace.
There are so many scenes in the second half which seem predictive, but then the director surprises you by adding an interesting angle to the scenes. The movie's lengthy screenplay has been compensated with the most sarcastic dialogues which will leave you in splits throughout the movie. The movie's last scene will unquestionably leave a smile on your face.
Ayushmann has done again remarkable job with his fabulous voice modulation once again after Dream Girl. Ayushmann owns every scene making Bala’s plight look believable as well as hilarious. He has also effortlessly got into the skin of a Kanpur local by nailing the U.P Accent. Bhumi Pednekar is impactful as the strong-headed lawyer Latika, who has always faced bias due to her dark skin. Yami Gautam looks beautiful and is quite impressive as Kanpur ki superstar Pari Mishra, a famous Tiktoker of Kanpur who gives you dose of laughter with her melodrama. Other star cast as Saurabh Shukla, Abhishek Banerjee, Seema Pahwa and Javed Jaffrey are good in their parts and often bring in the laughs.
The movie has been completely shot in Kanpur, a less explored place by filmmakers. The audiences get fresh and a beautiful visual tour of the small town Kanpur. The film’s music plays mostly in the background and blends well with the narrative.
Director Amar Kaushik attempts to drive home the message about how our society mocks those who are different. It has a strong social message with good entertainment values.
Overall, film Bala is worthy to watch once for good performances of star cast and its hilarious quotients.