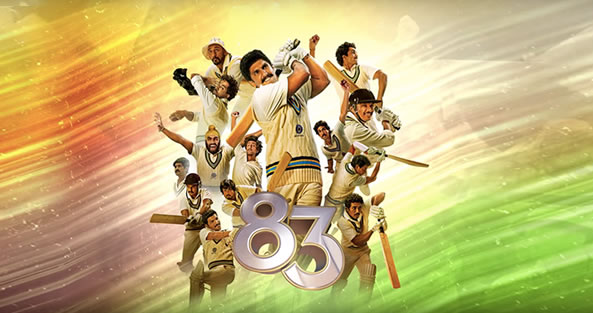 MOVIE RATING
Filmmaker Kabir Khan’s sports biopic not only captures the emotional heft of the success story of the underdogs, but also delivers a well-researched document in the popular idiom. It comes through early in the film when Kabir tells us a sweet story behind the team photograph, blending the real with the picturised one. The behind-the-scenes segments, the dressing room chats, and, of course, the recreation of Kapil’s devastating innings in the crucial India-Zimbabwe match (which wasn’t covered by the BBC), makes for a riveting big-screen experience.
About the film plot as Captain Kapil Dev led a team from India, seen as underdogs, to bring home the country’s first-ever World Cup title in the year 1983. Kabir Khan’s ‘83’ encapsulates the journey of this team that taught a nation to believe and to pin its hopes on its cricket players’ by returning home as a set of uniquely gifted world champions.
About the star cast performances, Ranveer Singh as Kapil Dev becomes Kapil Dev for two-and-a-half hours, and is the throbbing heart of this carnival of a movie. It is not just about the disarming toothy grin, the body language, prosthetics, and the hairdo, Ranveer also embodies Kapil’s never-say-die spirit and doesn’t allow himself to become a caricature. The Haryana Hurricane’s English might not have verbs, but the man is all action. Perhaps, the missing apostrophe before the title is a metaphor for the throbbing narrative and the personality of ‘Kapsi’; all heart, no malice. Be it Kapil’s relationship with Sunil Gavaskar (Tahir Bhasin) or the debonair ways of Sandeep Patil (Chirag Patil) or, for that matter, Mohinder Amarnath (Saqib Salim) living under the shadow of his famous father Lala Amarnath, the storyline is interspersed with important facts, trivia, little-known curios. More significantly, Kabir and co-writers Sanjay Puran Singh Chauhan and Vasan Bala have put them in context.
Besides Ranveer, Jiiva gets the heroic soul of Krish Srikkanth almost right, but Pankaj Tripathi as the team manager seems a little too keen to uncork the tear ducts of the viewers. Casting Mohinder and Mali Marshall in the roles of their celebrated fathers comes as a pleasant surprise, and so does Deepika Padukone’s turn as the modish Romi Dev. But some of the choices are baffling; Hardy Sandhu could not get the body language of Madan Lal right, and Vivian Richards (Jacques Taylor) has been reduced to just a gum-chewing bloke. One also can’t become Clive Lloyd by merely wearing spectacles! The hairdos of some of the West Indian fast bowlers are outlandish. The movie required a rousing music score, but Pritam fails to live up to the expectations. The English and Hindi cricket commentary could have been checked for grammar.
A special mention must be made for the way the iconic moments in Team India's journey in the 1983 World Cup were recreated for the movie. They were intermingled in beautifully with drama and emotions. The movie's writing team must be credited for weaving it all in, almost flawlessly. The movie is based on real events and there's little scope for one to take cinematic freedoms.
Finally, film 83 manages to recreate moments that give us goosebumps even four decades after the historic victory. Overall, Kabir Khan does set a high benchmark for himself, once again.