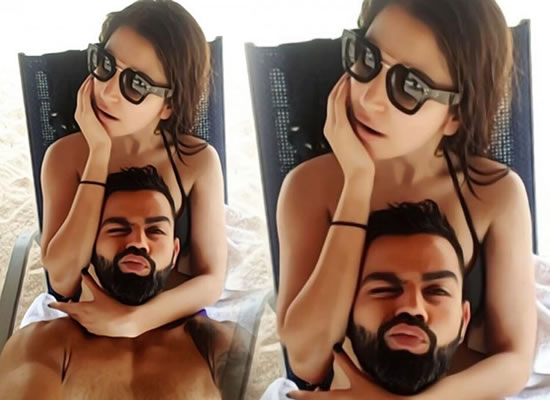 Celebs Virat Kohli and Anushka Sharma never cease to amaze their admirers with their goofy photographs while hanging out together on tours. Lately, Virat and Anushka returned to Mumbai after Team India concluded their tournament with West Indies. While the team was playing, Anushka also was with Virat and often used to hangout post matches.
Recently, Virat took to Instagram to share a throwback vacay selfie that is bound to beat your mid-week blues. In the photograph, Anushka can be seen sitting on a recliner chair in a black swimsuit and a pair of shades. Virat can be seen lying in Anushka’s lap with shades on and they snapped an adorable selfie. Virat and Anushka’s goofy expressions are bound to leave you swooning over their chemistry. Both Virushka can be seen chilling at a beach as they enjoy each other’s company.