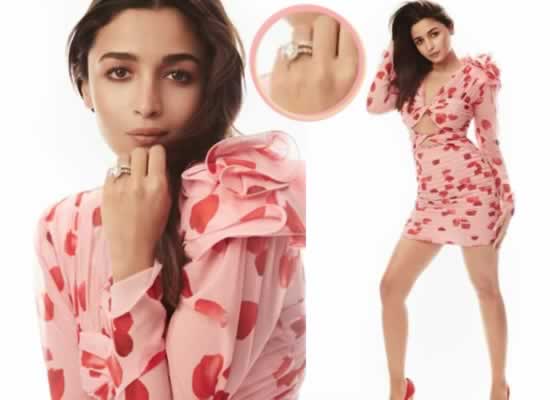 After announcement of her first pregnancy with Ranbir Kapoor, the Student of the Year actress is shooting in London for her Hollywood debut Heart Of Stone alongside Gal Gadot. Actually, Koffee With Karan is transformed for a new season and everybody is waiting with bated breaths to see the new season and hear some celeb gossip. Lately the trailer was released and fans have been going gaga over it. As per media updates, Alia will be featuring in one of the episodes along with her Rocky Aur Rani Ki Prem Kahani co-star Ranveer Singh.
Now, she took to her Instagram handle to give us a glimpse of her look in the show but what caught our attention was her engagement ring. In the pics, we can see Alia Bhatt wearing a pink-coloured bodycon dress with red hearts made on it. She left her hair open, wore red pumps and posted several pics posing in different angles. Sharing this pic, Alia wrote, “how I sipped some koffee this year.” If you look at her closeups closely, you will notice the massive diamond ring on her finger.
On the work front, she will be seen in Brahmastra opposite Ranbir Kapoor which is scheduled to release on September 9.