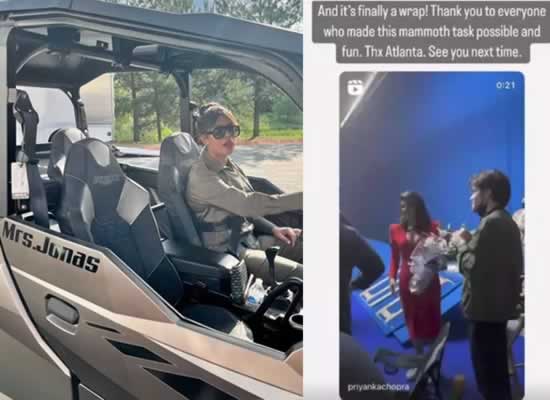 Well-known international diva Priyanka Chopra wrapped up the shooting of Citadel. The actress who was already posting updates from the sets lately posted a video featuring all the special filming moments after finishing the shoot of the show in Atlanta. In the note pronouncing the shoot wrap, Priyanka posted, "Thank you to everyone who made this mammoth task possible and fun."
Priyanka shared a reel that consisted of several big moments from her filming journey. From giving a glimpse of her character's name, Nadia which was posted on her vanity van to her on-set chair featuring her full name, Priyanka Chopra Jonas, the actress further added some fun moments in her video. In the video, Priyanka was also seen driving the custom car that her husband Nick Jonas gifted her on set. Earlier, Priyanka had posted a pic of herself with the car, featuring Mrs Jonas on it and wrote, "Now that’s a ride… thank you @nickjonas always helping with my cool quotient."