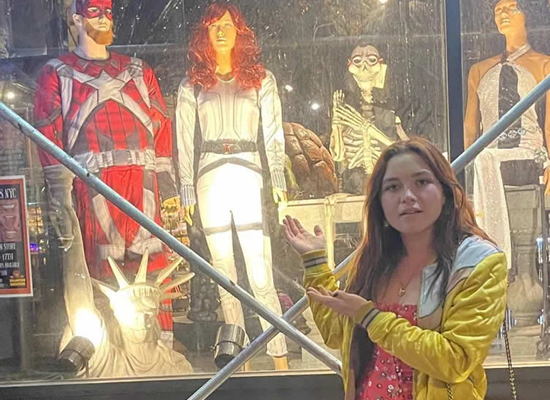 Hollywood biggie Florence Pugh took to Instagram to share a "rant" where she requested fans why dressing up as her Black Widow character Yelena for Halloween would be a good choice. Pugh shared the post after finding out her outfit was missing in a window display that featured Halloween costumes made to look like Johansson's Black Widow and Harbour’s Red Guardian.
Standing opposite to the window display that featured Halloween costumes inspired by Black Widow, Florence posed for a pic after realising Yelena's costume was missing. In her captions, the actress went on to write a long note, to persuade her followers on why Yelena's costume would be a smart choice given the number of pockets her popular vest has. In the caption, Pugh posted, "Apparently Yelena didn’t make the cut. GUYS. I LITERALLY TALK ABOUT POCKETS IN NEARLY EVERY SCENE. Halloween= A LOT OF FREE SWEETIES. May I remind you that the vest has “A LOT OF HANDY POCKETS”..Costume+vest+POCKETS= someone who came prepared. IT IS with great importance we understand how vital Yelena is for Halloween. Rant over, thanks for listening."
Earlier, Pugh was introduced as Yelena Belova in Marvel's recent film, Black Widow.