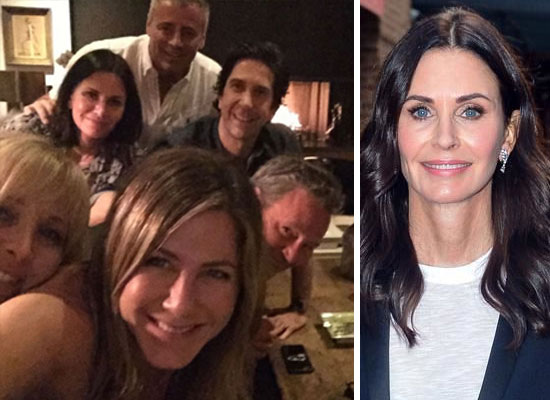 As per reports, HBO is working on a Friends reunion, it is all the admirers have been speaking about, and Courteney Cox is just as thrilled.
During a latest media chat Kevin Nealon, the actress, who essayed Monica Geller for the famous sitcom’s 10 seasons, gushed about recalling her Friends journey with her co-stars Jennifer Aniston, Lisa Kudrow, Matthew Perry, Matt LeBlanc and David Schwimmer. She told it would be the first time the actors will all sit together in a room and talk about the show.
Courteney couldn’t stop gushing about how much fun they are going to have while recalling about their incredible journey on the show, a daily reported. She also stated that they already had a small reunion of their own when they lately got together for dinner. Jennifer even shared a photo from the night on Instagram. In fact, that was the first picture she posted after creating her Instagram account which ended up breaking the internet.
While Courteney, Lisa, and Jennifer keep posting pictures with each other, the actress disclosed that all six of them rarely get together. She told it was the second time they all hung out after the show ended in 2004. The actors will reunite for an HBO max special and the shooting will take place on original soundstage at the Warner Bros. Studio. Seemingly, the unscripted special debut in May 2020.