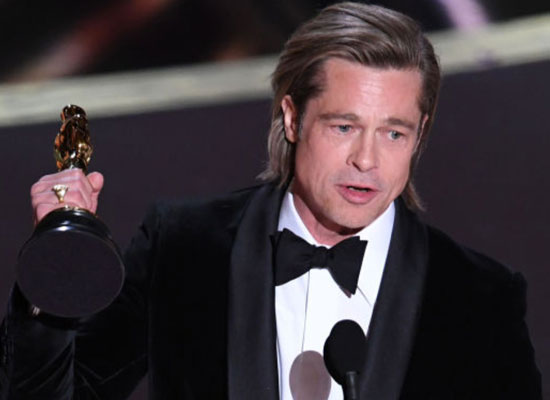 Well-known Oscars 2020 has started on a great note as Brad Pitt bagged his first-ever Academy Award for acting. Pitt won the Best Actor in a Supporting Role for Once Upon A Time in Hollywood. Brad Pitt beat Al Pacino and Joe Pesci for The Irishman, Tom Hanks for A Beautiful Day in the Neighborhood and Anthony Hopkins for The Two Popes for the award. Brad Pitt hugged his co-star Leonardo DiCaprio before he took to the stage and accepted the award. During the speech, Pitt dedicated his award to his children.
Brad Pitt, who shares six children with ex-wife Angelina Jolie, did not mention their names but he admitted his children "who colour everything I do – I adore you." He went on to pay tribute to Quentin Tarantino, who he deemed as "an original … one of a kind. The film industry would be a much drier place without you.”
He also thanked his parents, stunt people and his co-star, DiCaprio.