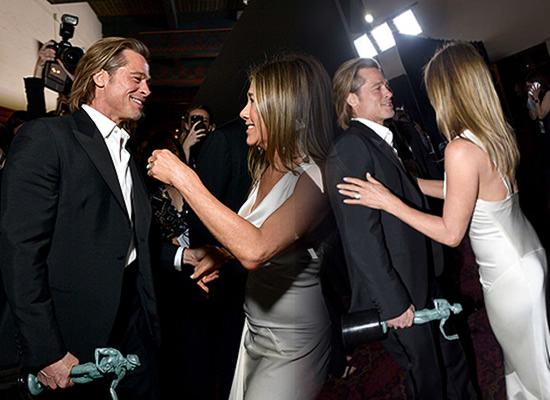 At the 26th annual Screen Actors Guild Awards, Hollywood biggies Brad Pitt and Jennifer Aniston ran into each other at the SAG Awards backstage and had a loveable reunion as they congratulated each other for winning the award.
The photographs of Pitt and Aniston sharing a friendly moment at the SAG backstage have sent the internet into an absolute frenzy and while the night was studded with various other Hollywood biggies, all eyes were on the former couple. Well, a video of Pitt’s reaction to his ex-wife SAG Awards acceptance speech for Outstanding Performance by a Female Actor in a Drama Series is also going viral.

As per a report, Aniston’s former flame stopped dead in his track to hear her speech. “Me: Brad and Jen are mature adults who can be friends without the world freaking out every time they're in the same room together ok? Me after seeing The Photo: do we call them Braniston or Anipitt,” a fan posted. “I'm not s wording them but their friendship is adorable. It feels good to see that they have left the past behind,” another tweet read.