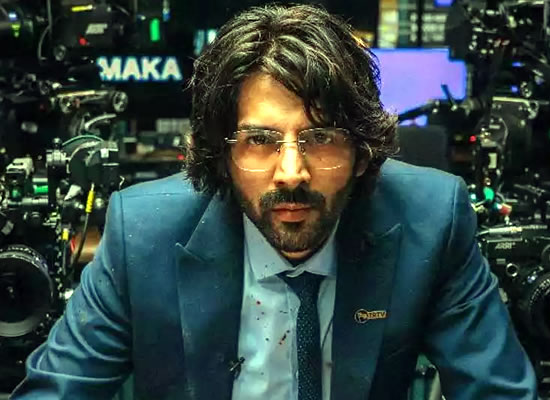 Bollywood actor Kartik Aaryan wanted to experiment if the audience can accept him as a selfish and sceptical news anchor Arjun Pathak in his recent release – Dhamaka. His performance, however, got him the recognition he has been aiming towards.
In a media chat, the Luka Chuppi star revealed, “The response is so solid that I am just amazed. Recently, I took a flight and the flight crew spoke to me about my performance. I am so happy to hear people’s response towards the film and my performance.”
“People are saying that this is Kartik 2.0. I am both happy and overwhelmed. It was a conscious decision to do something different. The day I did my first script reading, I was blown away with the concept. For me, Dhamaka was a film where I needed to give my best. I was conscious of the fact that I was doing something different,” he further revealed.
Furthermore, he shared, “I thought people would enjoy watching me in this new avatar. They have never seen me like this. I felt it will be exciting for them to see me like this and also exciting for me to play a character like this. Out of comfort zone was scary but I knew I was in good hands. Appreciation of Dhamaka has really validated me as an actor. I am relieved that people accepted me in Arjun Pathak’s role. Expectations keep you motivated but it’s also an added responsibility for any actor. It’s a dream come true for me. I am in a really good space where I am getting those roles which I have never played before. I enjoy the film making process and never take any pressure. I want to create my own niche and want people to talk about my own filmography.”
Kartik reveals that the success and acceptance of Dhamaka changed his view towards success. “I always wondered how can one gauge success without numbers. Dhamaka made me realise audience’s love is bigger than numbers. The kind of response I am getting today is by far my biggest success.  I am very happy with the response, and the way the audience is appreciating my performance,” he ends her conversation.