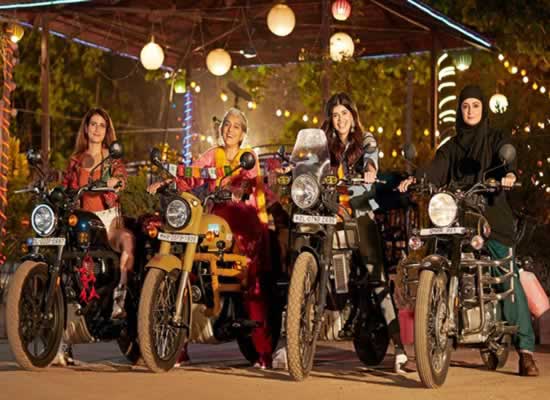 Recently, Viacom18 Studios and Taapsee Pannu's Outsiders Films Productions in association with BLM Pictures announced a brand-new movie titled 'Dhak Dhak''. Helmed by Tarun Dudeja, the adventure movie will see Fatima Sana Shaikh, Ratna Pathak Shah, Dia Mirza and Sanjana Sanghi gearing up and setting out on the ride of their lifetime.
Viacom18 Studios, who has been behind powerful stories and strong women characters from Kahaani, Queen, Mary Kom to Padmaavat, has now joined hands with Taapsee's Outsiders Films to bring forth a story of four women and their life changing journey to the highest motorable pass in the world.
On the association, COO, Viacom18 Studios told, "Dhak Dhak is a heart-warming story of four women undertaking a trip breaking out of their cocoons & discovering themselves through this journey of introspection and adventure. This was the perfect script and resonates well with the DNA of our storytelling."
The movie stars Fatima Sana Shaikh, Ratna Pathak Shah, Dia Mirza and Sanjana Sanghi as protagonists. Dhak Dhak, is co-produced by Taapsee Pannu, Pranjal Khandhdiya and Ayush Maheshwari. The movie is co-written by Parijat Joshi and Tarun Dudeja and directed by Tarun Dudeja.
On the collaboration and producing women-oriented concept films, Taapsee Pannu told, "At Outsiders Films we aim to produce films that are meaningful and entertaining. We have attempted to give audiences a visual experience that they have rarely seen on screen. Dhak Dhak narrates the story of four women who realise that freedom has to be owned and never given. Viacom18 Studios has been a crucial part of my journey in the film industry  from Chashme Baddoor,  Shabaash Mithu and now to  Dhak Dhak. I am sure that this ride will be an enriching one.”