Ayushmann Khurrana to begin filming his next 'An Action Hero'! Thu January 27th, 2022 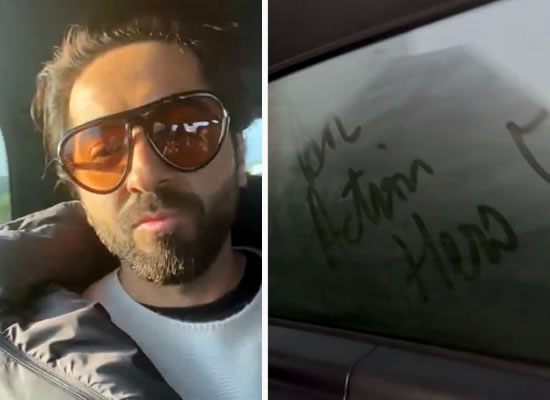 Well-known star Ayushmann Khurrana is one of the most sought actors in Bollywood. The Vicky Donor actor has never failed to impress us by going offbeat with his roles. After the success of his recently released movie Chandigarh Kare Aashiqui, he has started filming for his next ‘An Action Hero’ and it is evident from his post how excited he is to start shooting. Ayushmann posted a video of what his day 1 on the film sets looks like.
The video starts with Ayushmann Khurrana writing ‘An Action Hero’ with a heart symbol on the window of the car he is seated in. The actor then attempts to capture himself looking dapper wearing a black jacket with a cap over his white tee as the sun shines brightly on his face. He also wears black sunglasses. Ayushmann then shows us the view outside his car where the entire team of the film is waiting for him. The Bareilly Ki Barfi actor then runs towards the shooting spot and the video ends with a glimpse of the script.
An Action Hero will mark Ayushmann Khurrana’s first project in the action genre.