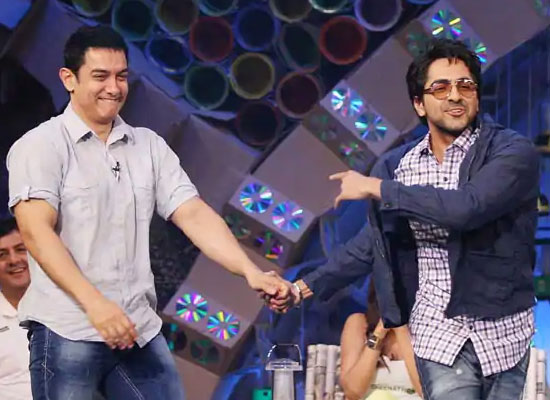 Bollywood star Ayushmann Khurrana reveals he is a huge fan of Aamir Khan's work and that he learnt something from the megastar even before he stepped into Bollywood.
Ayushmann revealed that he deliberately didn't see the original version of "Shubh Mangal Saavdhan", which is a remake of the Tamil movie "Kalyana Samayal Saadham", because of the lesson he received from superstar Aamir Khan.
"I did not watch the original and still haven't seen the original! I guess that's my method of going for a script. If someone offers me a remake, I don't watch the original, I just read the script. Sometimes the humour, the essence, the emotions are lost in the translation and it happens more than often," Ayushmann reevaled.
Ayushmann revealed that he learnt this from Aamir. "I was an MTV presenter and I remember I was interviewing him for ‘Ghajini'. I asked him this question, ‘How is the film different from the original?' He said, ‘I've not seen the original!' I was really fascinated. He said he had read the script and it was great. So, I took that cue and I found that to be a great lesson!" he revealed.