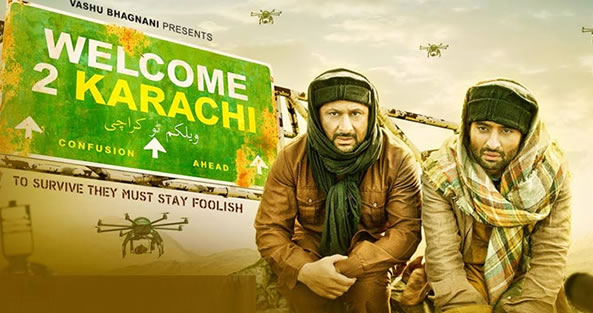 Synopsis: The story kicks off with two dumb and dumber friends, Shami (Arshad Warsi) a courtmartialed navy officer and Kedar (Jackky Bhagnani) a Gujarati who has been denied an American visa multiple times. Both plan to sail to the USA using a boat but, with a twist of fate, end up on the beach of Karachi, Pakistan. On realizing the truth they both try to escape, while being chased by an ISI Agent (Lauren Gottlieb). Both get kidnapped by a local don Azher Baluch, who demands ransom from Kedar's father and later releases them in a pathan colony to collect fake passports. But Shami, messes up with a bunch of pathans over an India-Pakistan match. In the struggle to escape from pathans both meet a Talibani militant, who takes them to a Taliban camp where they are misunderstood as Talibani militants.

Few days later, Shami and Kedar plans to escape the camp by stealing camp leader's mobile phone, which was actually a detonator of a bomb designed by Taliban to attack US army. In attempt to dial a number Shami unknowingly triggers the bomb destroying the Talibani camp itself. Attracted by the explosions, a Drone arrives and the two are arrested by American Army. After knowing their situation both are released only to be captured by Pakistani intelligence, who wants to take the credit of attack on Taliban by announcing both Shami and Kedar as Pakistani soldiers.
Soon the two are declared as national heroes by Pakistani media while the Indian media claims them as Indians stuck in Pakistan. Caught in this tug of war Shami and Kedar are once again been kidnapped by American army, who promises to deport them to India if they could give the credit of Talibani camp attack to US Army in media. They agree and are sent to Karachi Airport to finally catch a flight back to India. While waiting for their flight, Shami notices a Talibani militant disguised as an airlines pilot. Seeing a possibility of a terror attack they both decide to rescue, being backed by Pakistani army. During crossfire Shami and Kedar manage to overpower the militant and takes off with the plane, finally able to depart from Pakistan. The movie ends with both sitting in the cockpit only to find a strange voice behind them (possibly another militant).

Film is set in the backdrop of Money, Power & Business. largely based on the Stock market. more...
Home / Movies /Welcome 2 Karachi