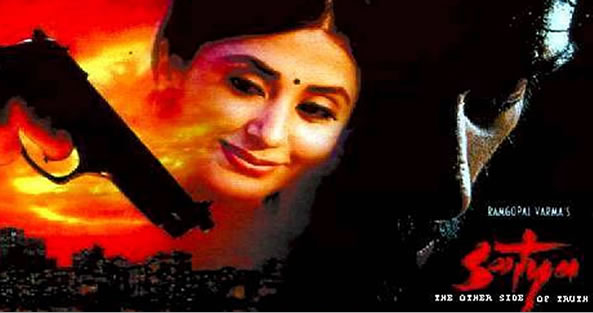 Satya (Hindi: सत्य; lit. "Truth") is a 1998 Hindi crime film directed by Ram Gopal Varma, presented by Bharat Shah with a screenplay by Anurag Kashyap and Saurabh Shukla. It stars J. D. Chakravarthy, Manoj Bajpai, Urmila Matondkar and Shefali Shah. The film tells the story of Satya, an immigrant who comes to Mumbai seeking his fortune but instead gets sucked into the Mumbai underworld. It is the first film in the Gangster (film series). It was followed by 2 sequels Company and D. Bollywood's 1998 blockbuster Satya shares many similarities with Om (Kannada: ಓಂ) which is a Kannada film directed by Upendra, starring Shivarajkumar, and notable for its exposure of Bangalore's criminal underworld.

The film was show cased among the Indian panorama section, at the 1998 International Film Festival of India.[1] Made on a shoestring budget of INR 2 crore[2] Satya became a surprise hit at the box office of 1998.[3][4] The film went on to win six Filmfare Awards, including the Filmfare Critics Award for Best Movie, four Star Screen Awards and Bollywood Movie Award – Best Director. Satya has been referred to as a modern masterpiece and it was considered one of the best films of the 1990s. It is also considered one of the best gangster films of all time.[5] Film critic Rajeev Masand has labeled it (along with its sequel Company) one of the "most influential movies of the past ten years." [6] The film marked the introduction of a new genre of film making, a variation of film noir[5] that has been called Mumbai noir, of which he is the acknowledged master.

Film is set in the backdrop of Money, Power & Business. largely based on the Stock market. more...
Home / Movies /Satya