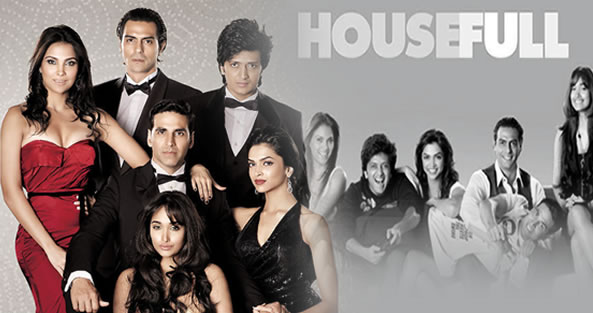 Synopsis: The story follows Aarush(Akshay Kumar), a 'panauti' (an unlucky person), who works in bar and gets money as people lose games of poker. After being rejected from getting married by a girl he dearly loves (Malaika Arora Khan), he then gets punched by her elder brother telling him to keep away from her. Aarush goes to London to stay for some time with his best friend, Bob (Riteish Deshmukh) and his wife, Hetal (Lara Dutta), both working at a casino owned by Kishore Samtani (Randhir Kapoor). Although at first Hetal is displeased with Aarush's presence, he proves to be a kind-hearted man looking for a family. Bob and Hetal decide to get him married to their boss' daughter, Devika Samtani (Jiah Khan). After the marriage, on their honeymoon in Italy, Devika leaves him for her longtime American boyfriend Benny. Aarush decides to commit suicide by drowning in the sea but is saved by a Telugu girl, Sandy (Deepika Padukone), who he kisses when she tries to make him breathe by giving him mouth to mouth.
Sandy originally thinks Aarush is a pervert but when Aakhri Pasta (Chunkey Pandey), the owner of Italy's "biggest" hotel where Aarush was spending his honeymoon with Devika, tells Sandy that Aarush is a widower as a joke and his wife died the day of their honeymoon, she befriends him and slowly falls in love with him. What she doesn't know is that Aakhri Pasta was only joking. Aarush calls Bob and Hetal to Italy telling him about the entire situation. Sandy then tells them that they helped Aarush after the death of his "wife" both misinterpret the situation that Aarush lied to Sandy about the dead wife. He later then meets Devika and asks for divorce papers. She then finds out his wife is alive and leaves him. Sandy does not allow Aarush to enter her room so he climbs from her balcony. Pasta thinks Aarush is committing suicide and live telecast is conducted. Sandy then switches on her tv and goes to her balcony but later when Aarush manages to clear the confusion, she accepts him.
The only way Aarush and Sandy can get married is by convincing her elder brother, Major Krishna Rao (Arjun Rampal), a strict Indian Military Intelligence officer who loves his sister and is over-protective of her. Meanwhile, Hetal lies to her father, Batuk Patel (Boman Irani), that Bob owns a mansion and they have a child, so she can meet him after so many years. On the other hand, Sandy tells her brother that Aarush is quite well to do too. The four are then forced to rent a mansion to make Hetal's dad believe that Bob owns it. Confusion prevails and somehow Batuk accidentally believes that Aarush is married to Hetal, and Bob is the cook. In the confusion they bring an African child and pretend that it is the baby.Then, Krishna turns up earlier than expected, much to Aarush's horror that Krishna was the one who punched him earlier leading to more lies and the two couples making him believe that Aarush owns the mansion.
For half of the term, the four must pretend that the mansion is owned by Bob, and the rest must pretend that Aarush owns it. Batuk Patel and the Landlady are Aarush's pseudo parents while Hetal is his sister and Bob is his brother in law. An overly suspicious Krishna goes to the casino as his bag was exchanged with Kishore Samtani. Krishna then sees Bob and Hetal working at the casino and as soon as they spot Krishna, they hide from him. Krishna then uses a lie detector on Aarush to find the truth. After Sandy objects, Krishna apologizes and agrees to Aarush and Sandy's marriage. The whole family is invited to the Royal Palace to see Krishna get rewarded by the Queen of England. While this is happening, two workers, Santa (Suresh Menon) and Banta Singh (Manoj Pahwa), are meant to be installing air conditioning gas for the place. However instead they accidentally supply the hall with laughing gas causing everyone to break into an outburst of laughter. During this laughter, the truth is let out but no one seems to be in the right state of mind.
The two workers meanwhile stop the gas from spreading – everyone comes back to their senses. Aarush is still telling Krishna the truth, leading Krishna to break off Sandy's engagement. However, after Sandy tearfully pleads with him, Krishna lets the two get married. In the end, Hetal and Bob live together with Batuk Patel, and Aarush's luck changes for the better.

Film is set in the backdrop of Money, Power & Business. largely based on the Stock market. more...
Home / Movies /Housefull