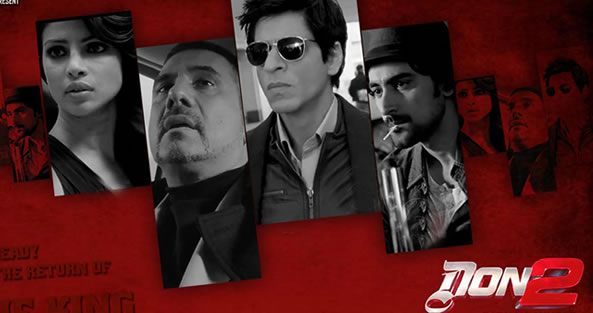 Don 2 is a 2011 Indian action thriller directed and co-written (with Ameet Mehta and Amrish Shah) by Farhan Akhtar. The film was produced by Ritesh Sidhwani, Shah Rukh Khan and Farhan Akhtar, and is a sequel to 2006's Don. It stars Shah Rukh Khan, Priyanka Chopra, Lara Dutta, Om Puri, Boman Irani and Kunal Kapoor, with Hrithik Roshan in a cameo appearance. The film's plot picks up at the end of Don, beginning in Malaysia and moving to Europe. Don, now king of the Asian underworld, plans to take over the European drug cartel. Don 2 marked Akhtar's return to directing after nearly five years. It was filmed in India, Thailand, Germany, Malaysia and Switzerland.

Synopsis: The film opens five years after the events of Don, with Don (Shah Rukh Khan) narrating the story. The European drug cartel bosses meet in the French Riviera to discuss a new threat emerging from Asia: Don is jeopardising their business by undercutting their prices, and the bosses decree that Don must die. Living in Thailand for the last five years, he goes to a remote settlement to pick up a shipment of cocaine. Instead of the expected uneventful transaction, Don fights his way out. He returns to Malaysia, surrendering to Roma (Priyanka Chopra), who has joined Interpol, and Inspector Malik (Om Puri). Don is sentenced to death and sent to prison, where he meets old rival Vardhan (Boman Irani). He offers Vardhan a partnership, and they escape from prison after poisoning the other inmates.

In Zurich Don meets trusted companion Ayesha (Lara Dutta), and they retrieve the contents of a locker accessible only by Vardhaan. In it is a tape of J.K. Diwan (Alyy Khan), vice-president of the Euro-printing DZB (Deutsche Zentral Bank), who was sent by Fabian Kohl to bribe Singhania (Rajesh Khattar) to kill a competitor. Singhania was killed by Vardhaan five years earlier. Don blackmails Diwan into giving him the bank's blueprints so he can steal the printing plates. Diwan misleads him and hires Abdul Jabbar (Nawab Shah), a deadly assassin. However, Don escapes, and baits Jabbar to working for him. With no other choice, Diwan gives Don the blueprints.
Don and his team plan and execute a bank robbery, taking hostages. After stealing the printing plates he is betrayed by Vardhaan and Jabbar, but escapes. However, Sameer (a team member) calls the police and Don is arrested; he threatens Sameer for informing on him. Unable to enter the bank and free the hostages, the police are forced to work with Don in exchange for giving him German immunity.
Don and Roma reach Vardhaan and Jabbar. When ordered by Vardhaan and Jabbar - and even Don himself - Roma is shot by Jabbar when she refuses to kill Don. She still has feelings for Don, although he killed her brother five years earlier, and she also refused to kill him because she refused to do it the illegal way. Don defeats Vardhaan and his thugs, and kills Jabbar. Don ultimately saves the entire team. Don obtains his immunity papers, surrendering the plates and a disc with information about his team. He brings Roma to a waiting ambulance, and they exchange glances before the doors close. Don later detonates a bomb planted earlier in Diwan's car.
In a final scene Don still has one of the currency plates, which the police think was destroyed by the explosion. Sameer was actually loyal to Don; informing the police was part of the plan. The disc Don gave them actually contains the names of the European drug cartel; when they are arrested, Don becomes king of the European underworld and tells Ayesha and Sameer they have no idea how rich they will become. When Ayesha tells him she was afraid he would be caught, he says: "Don ko pakadna mushkil hi nahin, namumkin hai" ("It is not just hard to catch Don, it is impossible.") and the film ends with the song "Dushman Mera".

An alcoholic professor is sent to a juvenile school, where he clashes with a gangster,.. more...
Home / Movies /Don 2